Henrik Stenson, a five-time Ryder Cup player, has been heavily linked with the LIV Golf Invitational Series since its launch earlier this year; Next event is due to take place in New Jersey from July 29-31.

Stenson looks set to be stripped of his Ryder Cup captaincy, the next Ryder Cup is set to be played in September and this is obviously a blow to the upcoming tournament.

Paul Casey among players committed to the LIV Golf Invitational Series and will make his debut in the next event, taking place in New Jersey, the Saudi-backed circuit currently does not have world ranking points on offer.

Just after winning the British Open at St Andrews Cameron Smith was asked to clarify his position on rumours that he is joining LIV Golf, the Australian said initially he felt the timing of the question was not good, but then went on to say he’s team sorts these things out and refused to deny his intentions.

LIV Golf Invitational Series will feature 12 teams of four players each. Since each event will be made up of a different field, teams will be decided via a draft the week of each event. Each team will have a LIV appointed team captain who will select their 3 open team positions via a snake draft format.

The LIV Golf Invitational Series is an eight-event series of golf tournaments that feature, as mentioned above: 48 players, 12 teams, 54 holes, no cuts and shotgun starts.

LIV (a reference to the Roman numerals for the number 54, a nod to the number of holes in the upstart tour’s tournaments) is trying to position itself as a PGA adversary by poaching big-name players such as Phil Mickelson, Dustin Johnson and Sergio Garcia for its first event. 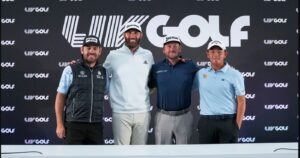